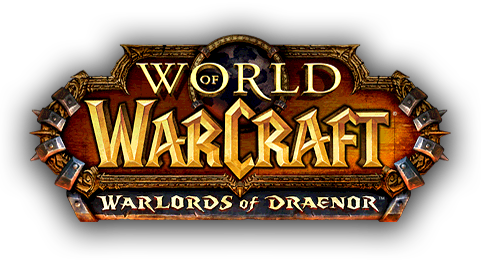 I've played World of Warcraft on a semi-regular basis for almost ten years now. I started playing because the idea of a free-roaming fantasy world peaked my interest, and having previously played past Warcraft titles I was already a fan of the franchise. Ten years on, with the arrival of the fifth expansion for the game, I'm finding that some of the changes have given me a renewed vigour for the story. 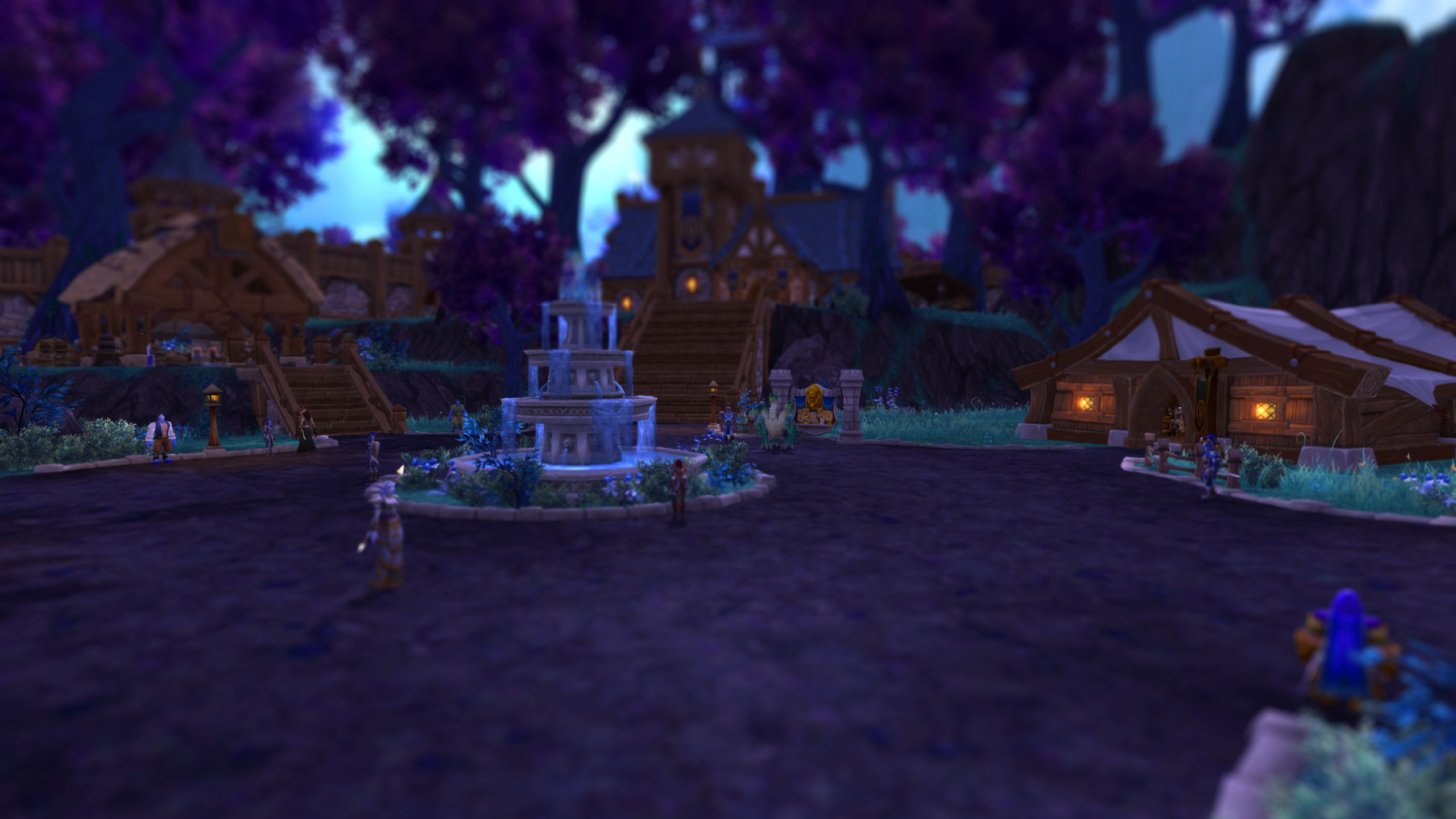 One of the largest, and most publicised features of the new expansion — which you've likely heard about if you've been interested in WoW over the last few months — is the garrison. Perhaps as a belated response to the calls for player housing over the past ten years, you are required at the beginning of your journey into Draenor to set up an outpost to serve as your foothold for this new fight. After establishing your garrison you continue to quest and as a result gather resources to be used in further expanding it. 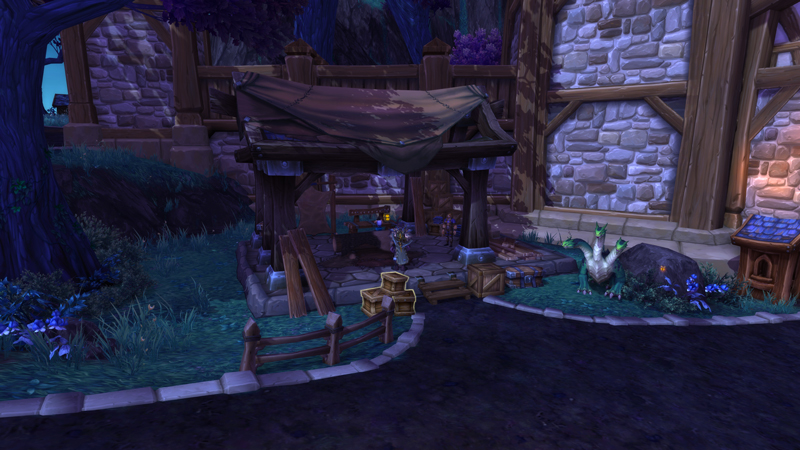 You build buildings to expand your garrison, adding them to pre-defined plots, giving you a pseudo-unique experience and letting you tailor your home-away-from-home to your own needs & style. Different buildings give bonuses to your character as you quest or allow access to trade skills — in game professions for the uninitiated — which your character may not have.

A major part of the garrison story is your character taking charge and leading people as you see fit, albeit on an on-rails story via the main trunk of the questing content. Roles become somewhat muddled as you gather a band of followers to command; send them off on missions on your behalf; watch them level up with experience gained from these mission; and eventually send them off on epic raiding quests taking hours at a time. This aspect of the game works on a similar style to a micro-transaction game the likes of which have been popularised by Facebook. Interaction is required at timed intervals, and tasks — missions in this case — take set periods to finish. Thankfully Blizzard has not gone the route of trying to squeeze players for more money and haven't added micro-transactions to speed up completion or to buy in-game currencies. 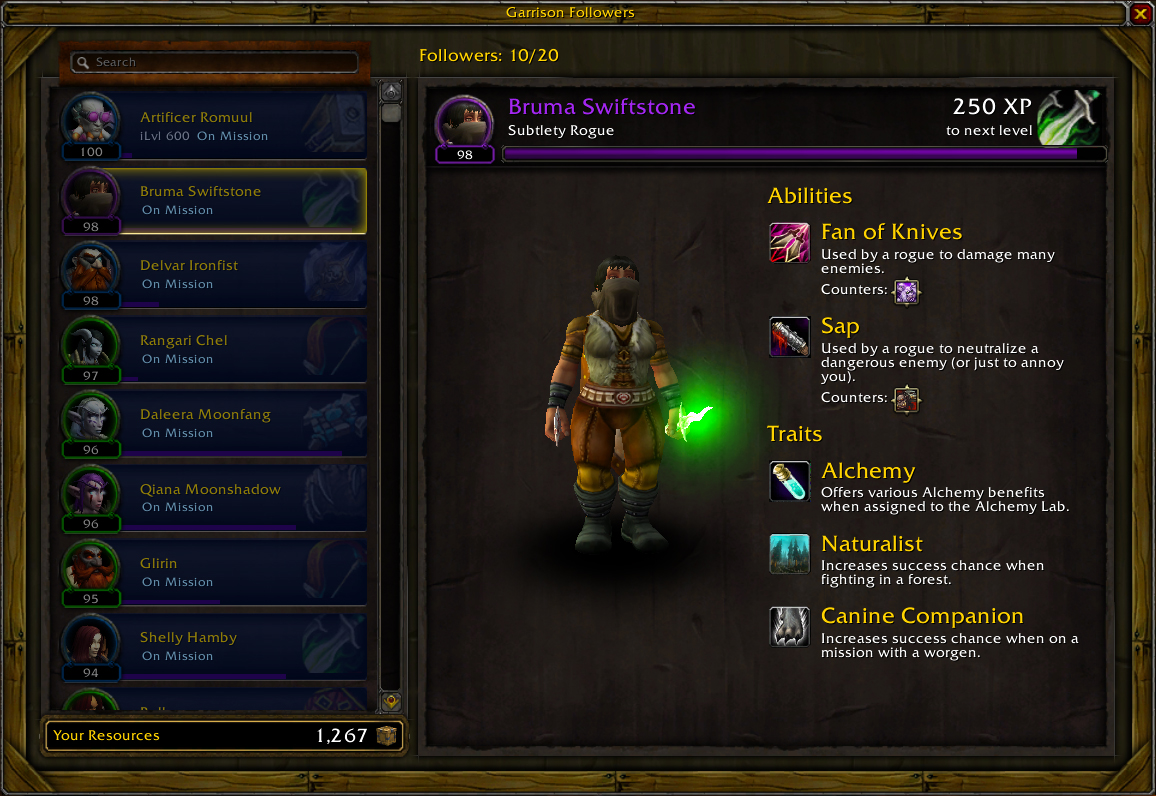 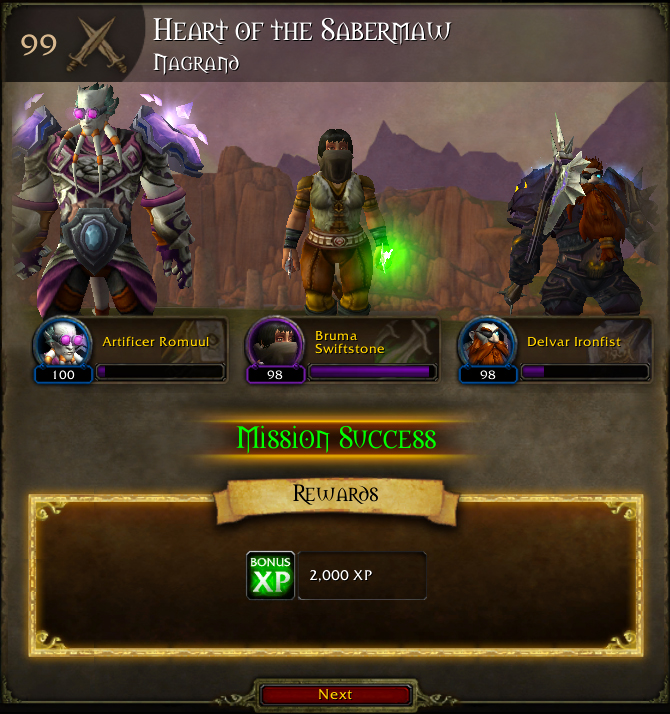 Your garrison is central to the story and provide the backbone for questing throughout Draenor; however much like the Pokémon pet battle elements that were added into the game a while back, follower quests are a nice addendum over and above the main gameplay focus.

I'm not much of a socialiser on WoW, I'm not in a guild — save for one I use to transfer content & currency between characters — and I don't know many people who play the game, barring a couple of seasonal players who drop in-and-out at different times of the year. I don't stand around in the in-game cities chatting or hang out online if I've nothing better to do. I'm logged in to play the game; to explore or find some content I've not seen before. I've levelled multiple characters up to the level cap over the years but I'm sure there's stuff out there I've still never seen, the whole game world is a collection of interwoven epic stories that are easily passed by.

I'm pleased with changes that've been made to make social group play a bit more inviting. New mechanics have been added for quest specific targets, named mobs that you would have been vying for access to previously are now shared between any and all players, giving kill credit to any player involved in the fight and having player specific loot for any dropped gear. These targets are marked with a quest icon — an exclamation mark (!) on their unit frame, as shown in the image above. The game feels a lot more fluid, with multiple players banding together to defeat a common foe without the need to pre-arrange a group.

Quest rewards and drops are a staple element of the questing structure in World of Warcraft. In previous expansions it was a mixed bag and, if you weren't questing for specific gear, a bit of a lottery when it came to upgrading your equipment. Warlords of Draenor has drastically simplified gearing and stats, making upgrading your gear as you level a much easier task.

There are five main stats attached in various combinations to pieces of gear; these are stamina, strength, agility, intellect and spirit. Each class in game benefits from some of these stats in different ways. Melee classes benefit from strength or agility, whereas casters benefit from intellect or spirit, stamina is used by all classes and increases the hit points a character has. A secondary set of stats are also attached to gear, these stats can effect things such as your damage output, defence and can impact on how often you can use your abilities.

Warlords of Draenor has seen these secondary stats revamped, removing stats that were essentially required to ensure you achieved optimal damage. Instead we're given a single secondary stat per class that they receive an extra benefit from, usually a 5% increase. Most classes benefit from loading up on that one secondary stat as much as possible.

Quest rewards have been reworked too in Warlords, now we're presented with class appropriate rewards — we no longer have to deal with quest rewards that will be absolutely no use to us. Gear also has non-spec stats attached too. Some classes in World of Warcraft have hybrid roles, switching between these functions could call for different primary stats on gear — for example agility may be required for a damage dealing role whilst intellect is needed for a healing role. Previously players would need to carry two sets of gear with appropriate stats, these new changes mean that a single set of equipment can be used for both functions.

Another nicety added in for Warlords is the chance that any dropped loot or quest rewards will be upgraded. Loot in WoW falls into one of six categories: Poor, Common, Uncommon, Rare, Epic and Legendary. Quest rewards are generally uncommon (green) or higher, legendary rewards are reserved for very long and arduous quest chains. The new system gives the chance that quest rewards and loot can be randomly upgraded from an uncommon or rare quality item to a rare or epic quality item. Whilst not to be relied upon it can make upgrading your gear a bit quicker and questing more exciting.

There are a raft of other things that have been tweaked or added to the game that make things a little bit nicer. New zones, revisiting old content in a new setting, the whole alternate timeline thing — it seems to have worked for Abrams and Star Trek! A few of the little things that I've found and been excited about are below. 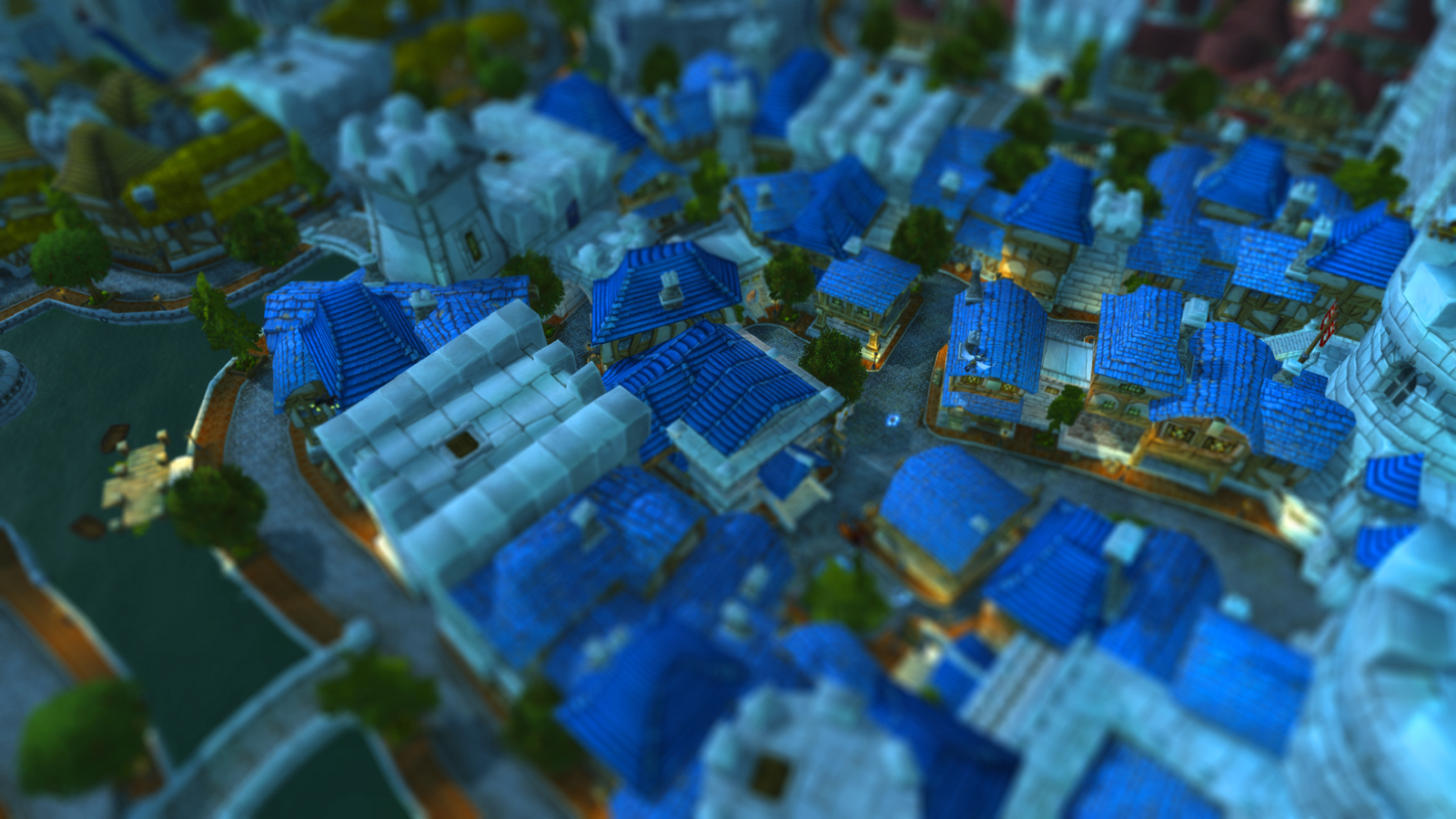 A couple of expansions ago a big ol' dragon named Deathwing buggered up the entire in-game world, cutting zones in half and destroying portions of cities. Since then in game Non-Player Characters (NPCs) have been toiling away to get things fixed up again. With the arrival of Warlords they've finally finished putting Stormwind — the Alliance capital — back to its former glory.

There's literally hundreds of hidden treasures and mini-puzzles hidden throughout the world of Draenor. Objects you can interact with to pick up a rare or epic bit of kit; or sometimes just a random bit of lore related junk. Not to mention all the rare spawned mobs littered around the zones that provide a bit of an extra challenge and the odd bit of gear as you level. Lots of these elements are easter eggs or references to other things. 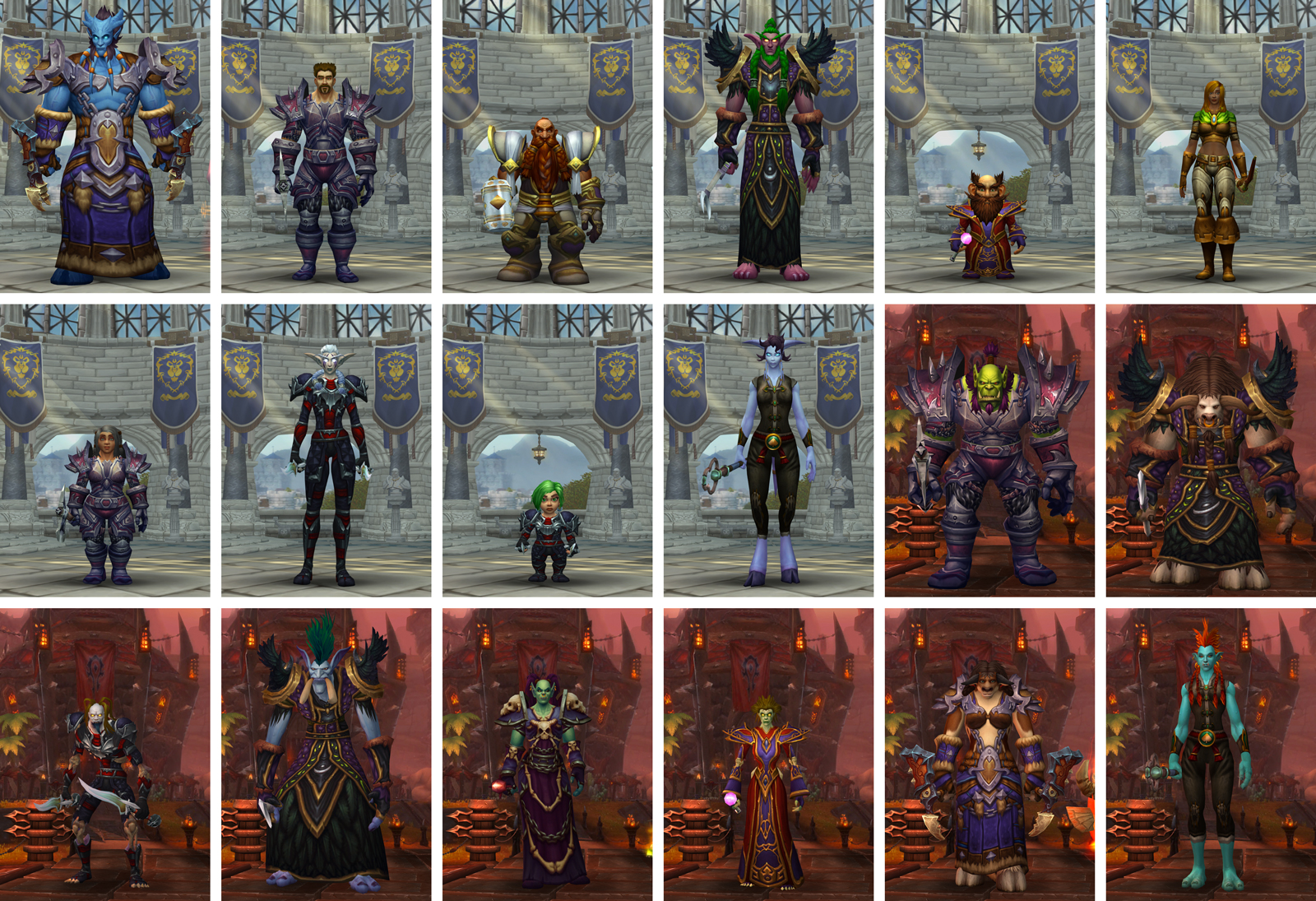 Blizzard have dragged World of Warcraft firmly into the 2010s by updating the character models for their playable races. WoW has never been known for its visual appeal, opting for a more cartoon style to the visuals. Part of the allure for many people has been the ability to play the game on lower specced machines, not requiring cutting edge equipment to play.

After many years we've finally got some new character models. Updated styles, and higher density textures make the characters look much nicer. Alongside a bump in graphics overall makes WoW look a lot nicer but still with its roots in a cartoonish look-and-feel.

Such a small part of the overall gameplay, but something I've fallen totally in love with is characters interacting with ground clutter. Long grass and weeds move out of the way when a character runs through them.

Like voice acting, cutscenes have been used throughout WoW for years, but again we're treated to an expanded array of cutscenes throughout the story content in Warlords.

There are loads of other things out there, Wowhead has a range of good WoD launch guides.