I have had an idea which may revolutionise computing.

The idea which I have uses this technology to provide a means of cross computer interaction with no physical connection between them (i.e. network). The idea is spawned from days in the lab, sitting with my PowerBook and desktop machine both running at the same time. My desktop has an Internet connection whereas my PowerBook however does not have a connection at university, this poses a problem whilst trying to exchange data (text snipits, files, URLs, etc) between the two computers. 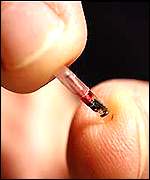 The RFID tag is implanted into the forefinger of the user's left hand, then when using a special keyboard with an RFID sensor underneath the user can copy data between the computer and his hand. From here the user will be able to use the data stored in his hand with other devices.

This would allow the user to say:

This would solve all those niggling problems with transferring and copying data between two physically near computers without the need for e-mail, file transfers or other means of doing so. Obviously this is constrained by file sizes and the data held in the RFID tag would degrade over time, however as this is a local, quick exchange of data, that shouldn't matter.

Essentially you would be transferring data in a Minority Report style of interaction (without all the cool hand gestures). You would carry the data from one terminal to another.

Stick a finger up at USB sticks,
- Chris