There are a few tools I use day-to-day that I couldn't be without, one of them is a colour picker to use on the desktop. Traditionally I used the one that ships with Mac OS X called Digital Color Meter, however at around the time Lion was released there was an update which dropped functionality I was heavily reliant on. The Mac App Store was still in its infancy, but after a few searches I'd found the replacement I was looking for — Classic Color Meter. 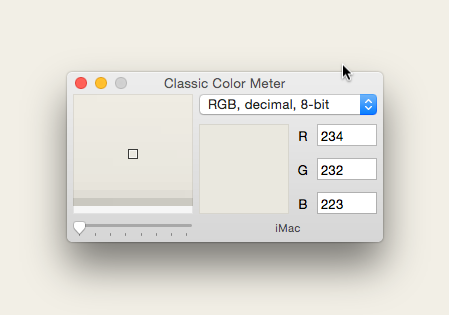 It promised to replicate the original functionality of the Digital Color Meter, allowing me to essentially replace the application with this one and carry on as before. Since then it's grown and added some extra functionality which should make it useful to designers and developers across the board. 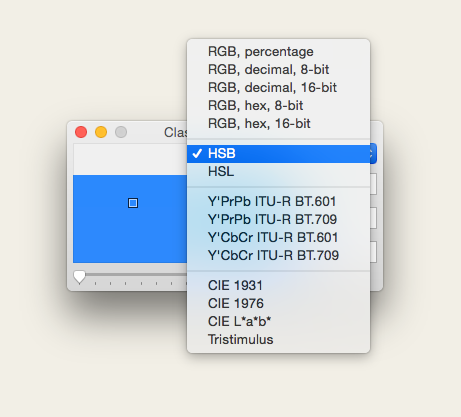 My main use case of the original Digital Color Meter was to pick the hexadecimal values from colours on designs or websites. I could hover the target pixel and the R, G & B labels in the app would show me the hexadecimal values of the colour at that pixel. The Lion update removed the hex view, switching to full integer RGB values which, whilst convertible to hexadecimal, aren't really as useful.

Enter Classic Color Meter. Straight out of the box I can view colours in various formats including the 8-bit hexadecimal I'd been using previously. Alongside the format I'd been lusting after are a range of formats I've found useful since: RGB percentages, RGB Decimal (8 and 16-bit), RGB hexadecimal (8 and 16-bit), HSB & HSL; as well as a raft of YPBPR and YCBCR options which I'm clueless about the use of.

There are a range of features included in the Classic Color Meter which I find useful or improved when compared to the Digital Color Meter application.

It's not a sexy thing, it's an application for picking colours. But Classic Color Meter takes something boring and makes it sexy, by doing it so very well; there's nothing more I'd ask of this application, save for it to perhaps run a menu bar helper to give me access all the time. It's only of use to a small subset of Mac users, but for those it should be a no-brainer, instant purchase. And at only £2.29 ($2.99) on the Mac App Store it's a steal.